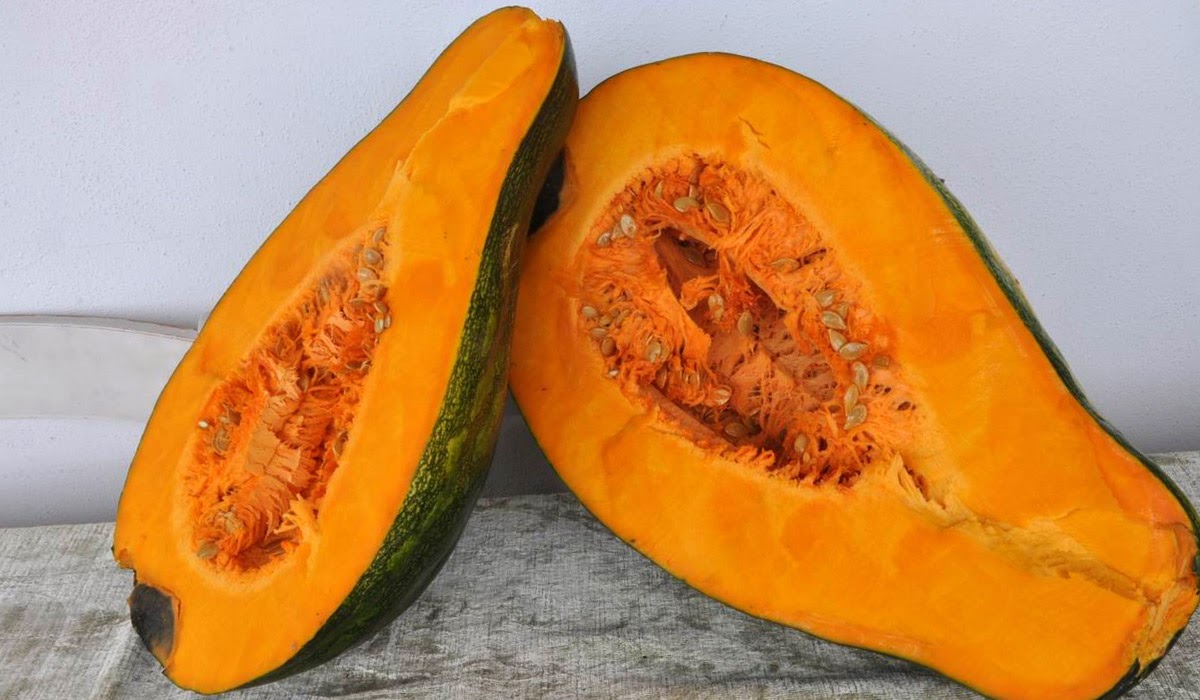 This is a traditional Haitian dish eaten on new years. On January 1st, which also happens to be Haiti’s independence day, every Haitian household local or abroad are cooking the giant pot of Soup Joumou. On new year’s eve, everything is prep, and the matriarch of the family wakes up in the middle of the night or stay up after New Year’s eve service if they are churchgoers;  like a soup ninja and make The Soup Joumou.
The making of Soup Joumou is very special, the soup itself is a cry of freedom. The soup is a celebration of Independence and freedom from slavery.
See, during slavery, the Soup Joumou or (Soup au Gireaumon) as the French would say, was a delicacy only the french masters could have. The slave would make the soup for their masters but wasn’t allowed to have any.
This is why on January 1st, 1804 the day of Haiti’s independence, after they had won the war, ended slavery and chased the colonizers out of the island, they celebrated with the very thing they weren’t allowed to have.
The delicious Soup Joumou! 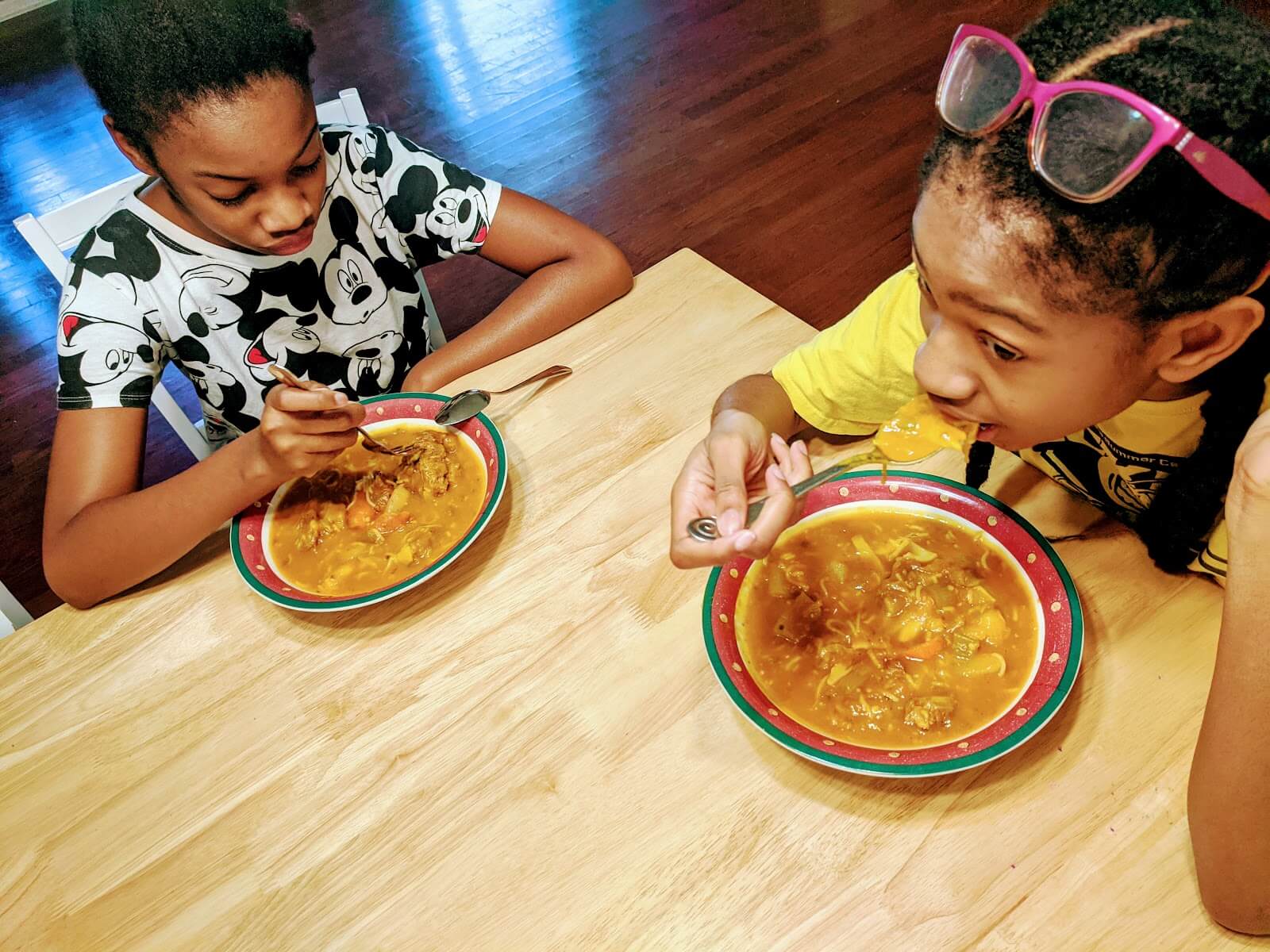 Also, on January 1st was the day the slave masters would trade skilled slave among themselves, there’s a saying in Haiti that goes “whatever you do on New year’s day is what you would do for the rest of the year” This sentiment came from the slave trade. When a skilled slave was traded to go work on the different plantations, he or she was bound to do the same job for the rest of the year until the next year’s trade.

This is why the soup is cooked in the middle of the night, so nobody does any manual labor on New Year’s Day.

New Year’s Day is a day of a rest day, you eat soup, spend time with family until about six in the afternoon when they start prepping for January 2nd which is ancestor’s day.

January 2nd is a holiday called “Jour des aieux” which translates to Ancestor’s day, we celebrate kinda like thanksgiving on steroids, but this is a story for another day.
Family, friends, and neighbors exchange a bowl of soup, adults give children money.
As a kid you would go around telling everybody Happy new year, they’ll speak blessings over you for the new year and give you a “Zetrènn”, basically money.
Adults would wish each other health, prosperity sometimes exchanges money also depends on their relationship.
This tradition echo along with whatever you do at the beginning of the year is what you will do for the rest of the year, so having money.
The Soup Joumou is a team effort, everybody in the household help in some way but the matriarch of the family is in charge.  The making of Soup Joumou is kind of like Thanksgiving in America, the person making the potato salad or mac and cheese you got to have street creds. One does not just take over making the Soup. You have to sit at the feet of the master mostly all your life and learn LOL

When I was little, I was in charge of preparing the spices, my sister would be chopping, and my brother would stir.
To this day, in my house my mom still makes the soup, l helped but I’m not totally in charge yet, not because I don’t know how to make the soup but simply because of the soup Joumou on new year’s day it a BIG deal!

Haitian people don’t cook with a recipe, you learn to cook by watching your mama in the kitchen. It’s a bit of this and a bit of that, nothing is written down. Last year I started on a quest to record all our favorite recipes because my mama is 75 and losing her vision, so we are working together to put things on paper for the grandkids. And quite frankly I haven’t totally mastered the art of listening to the ancestor’s measurement system, so recording the amounts help me stay true to the recipe and be able to share it with you! 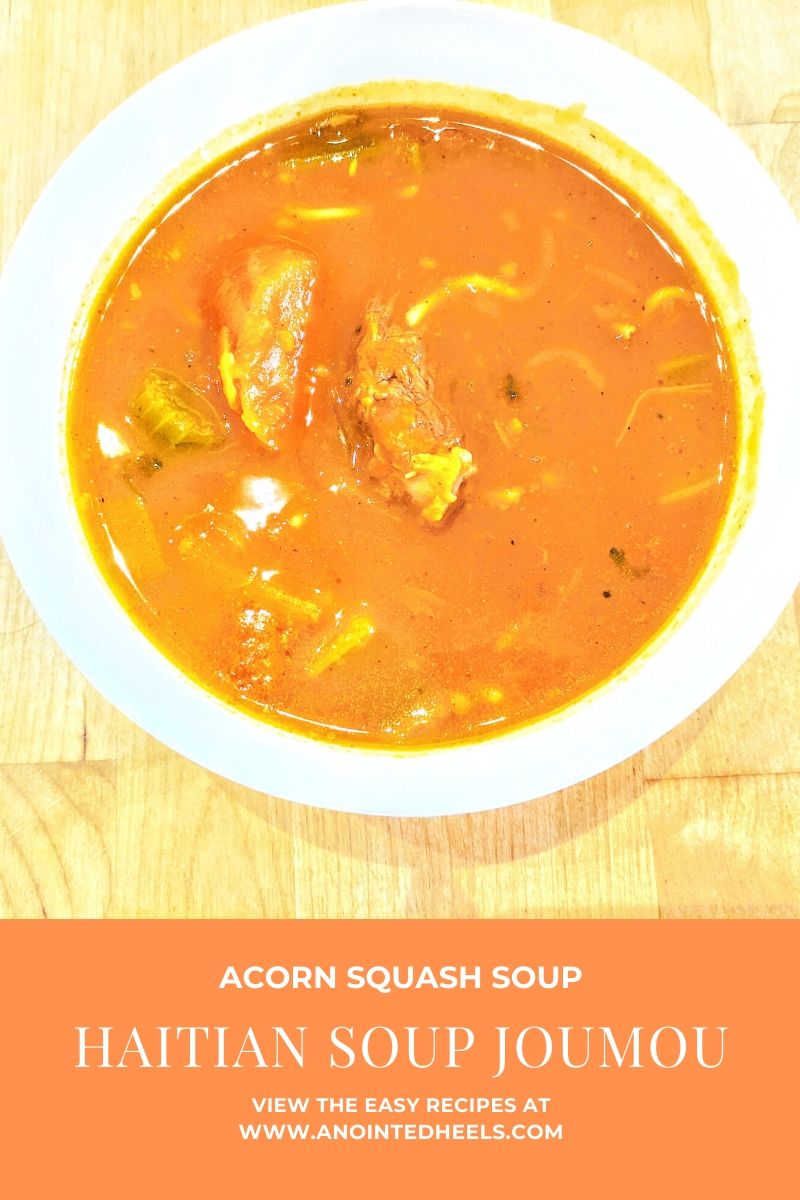 For this soup, this is what you will need

Directions
For any good Haitian dish, the secret is in the spice. We mix our own marinade for the meat, in the real wooden Mortar & Pestles
In there you would add your garlic, green onion, bouillon cube salt, and pepper and mash until you have a fine paste.
After cleaning your meat, you would add the spice mixture and start cooking your meat with the squash on top. You want your meat to be tender and your squash to soften.
While the meat in cooking you would start chopping all your other ingredients.
When the meat is cooked, you would remove the squash and mashed it in a blender or food processor until it’s liquid and pour in back in the pot. I forgot to measure the water but you want to add enough water for soup consistency.
By now you can start adding all the other veggies to the soup, the noodles go last because you don’t want them to overcook and turn your soup into a thick mush.
You will let the soup boil until all your veggies are cooked and the soup turns into a nice rich deep yellow color.
Your soup color in important, Haitian people are judgy! Yes, we will judge you to kingdom come by the color of your soup. However, I want you to try this delicious, heavenly soup if you attempt this please let me know. I promise to not be judgy.
Now for your pleasure enjoy all these yummy delicious soup recipes from my friends. 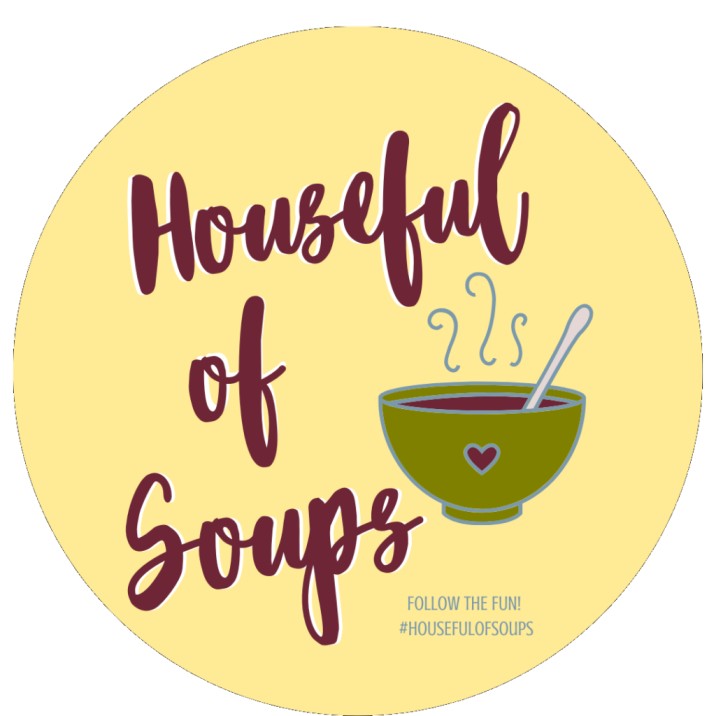 Please visit all of the blogs as they’ve worked really hard to participate in the blog hop,  Have fun making soup in this cold weather and let me know which ones were your favorites
YOU MAY ALSO LIKE THESE POSTS

Sign up for our weekly updates to be delivered right to your inbox, along with our monthly newsletters that offer EXCLUSIVE contents on Faith, lifestyle, and healthy habits.